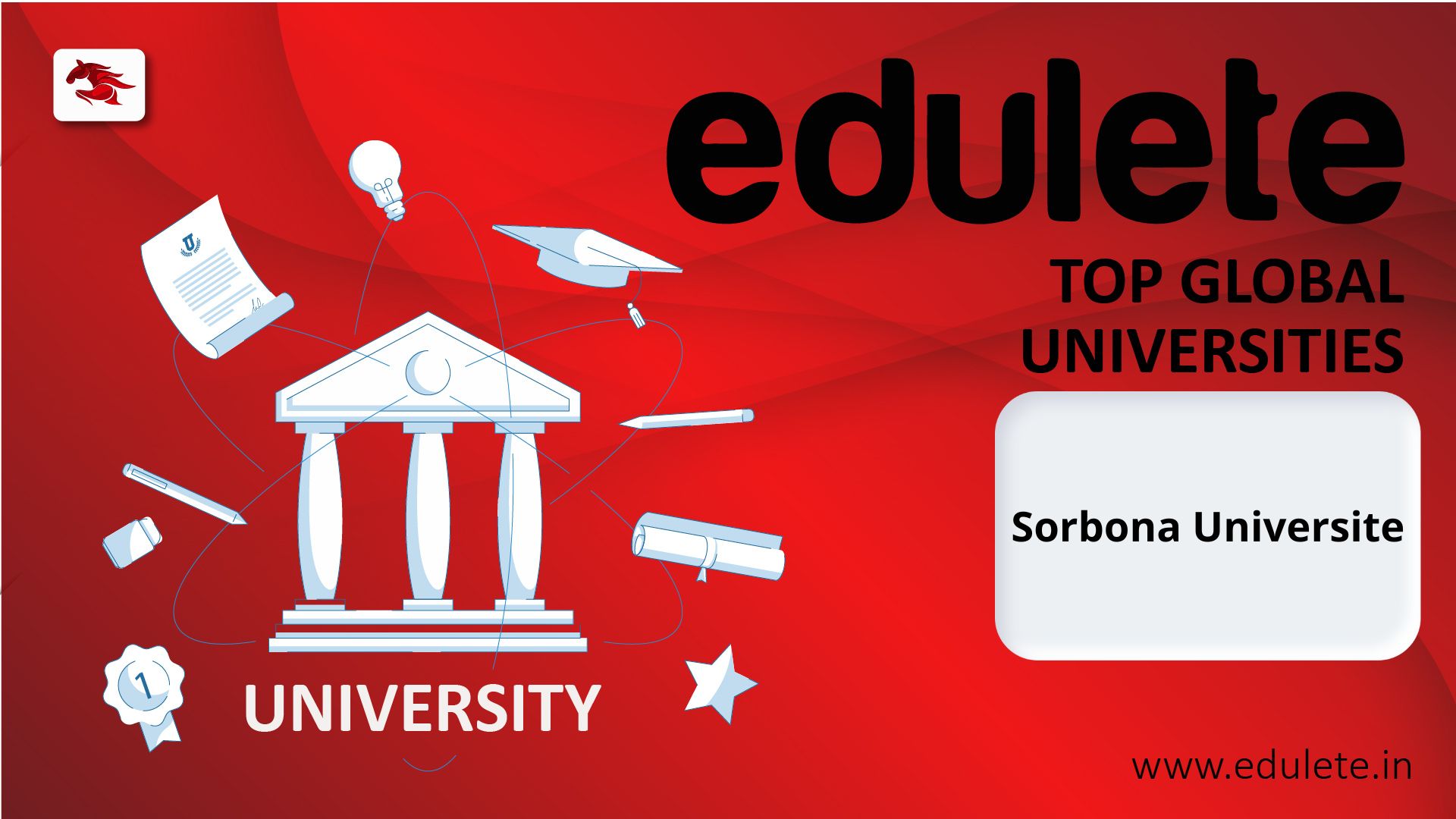 An Overview of Sorbonne University

Sorbonne University is a world-class research institute formed by the merger of two leading French universities, Paris-Sorbonne and Pierre & Marie Curie.The university has been ranked #1 in Best Global Universities in France by US News and World Report, demonstrating its consistency as the most popular and sought-after institute.

The university has a lenient admission policy, with a 100% acceptance rate. The university currently has 43,585 students enrolled in various programs. There are 8,687 international students, accounting for 20% of the total student population. To apply for programs at Sorbonne University, international students must submit their GPA, official transcripts, financial documentation, and course specific requirements.

Sorbonne University, known for its selectivity, is one of the most sought-after universities by students and researchers from France, Europe, and French-speaking countries. Most notably, Marie Curie, who arrived in Paris from Poland in 1891 and joined the Sorbonne’s faculty of sciences, was the first woman to become a professor at the Sorbonne. Marie Curie and her husband Pierre Curie are regarded as the founders of Sorbonne University’s modern Faculty of Science and Engineering.

The majority of university courses are taught in French, and any student applying to higher education must demonstrate their proficiency in the language. It is recommended that all international applicants have a B2 or C1 level of French proficiency. Unless they have a French baccalaureate, all candidates for the department of Medicine must have a level C1 in French.

The history of Sorbonne University is inextricably linked to the history of the University of Paris, which was founded in the 13th century, and the Sorbonne, which became its main center of excellence. The university offers a wide range of courses, from bachelor’s to doctoral degrees.

Sorbonne University’s academic year begins in September and is divided into two semesters. The first term concludes in late January, and the second in early June. Sorbonne University admissions are based on the Campus France website’s deadlines. The deadline for ECF applications is January 17, 2021. Non-European students enrolling in a higher education cycle in France for the first time must currently pay annual registration fees of € 2,770 for a license and € 3,770 for masters.

What Is The Ranking of Sorbonne University?

Sorbonne University is a world-class research university that offers a broad range of disciplines in the arts, humanities, social sciences, natural sciences, engineering, and medicine. Sorbonne University provides a diverse range of courses ranging from bachelor’s to doctoral degrees in the arts, humanities, science, and engineering, as well as medical and paramedical degrees. The academic year is typically split up into semesters. Tuition for some bachelor’s programs is less than $1,000 USD for international students.

Where Is Sorbonne University Located?

Sorbonne University (French: Université Sorbonne; la Sorbonne: ‘the Sorbonne’) is a public research university in Paris, France. The institution’s history dates back to 1257, when Robert de Sorbon founded Sorbonne College as one of Europe’s first universities.

Sorbonne University is regarded as one of Europe’s and the world’s most prestigious universities. It has a world-class reputation in academia and industry, with 33 Nobel Prizes, six Fields Medals, and one Turing Award among its alumni and professors as of 2021.

People in Paris are on the cutting edge of many things. Business professionals, politicians and political scientists, researchers, scientists, artists, fashion designers, and others are frequently among the most respected and well-known individuals on a local, regional, and global scale. You can join the ranks of people making their mark on the global stage by studying abroad in Paris.

Some of Europe’s most famous museums, landmarks, and monuments can be found in Paris. You are encouraged to unleash your inner tourist as a study abroad student! Many study abroad Paris programs include visits to important landmarks such as the Eiffel Tower, the Louvre, the National Museum of the Renaissance, and others. Other students go to such places on their own. When you study abroad in Paris, you will have the freedom to visit some of the world’s most beloved places, whether in a group or on your own.

Paris is a visual treat. If you want to be stimulated on a daily basis, Paris is the place to be. Colors, textures, shapes, and designs abound in the city, reaching into your soul and tickling your heart strings. A daily walk will show you the many visually stunning aspects of Paris that are hidden in seemingly ordinary neighborhoods, well-known tourist destinations, or simple street corners. Paris is certainly a sight to behold.

Paris’ atmosphere is as opulent as its cuisine. Paris’s rich and vibrant atmosphere will overpower you with each step you take. The sounds, smells, sights, and sensations of the city all combine to create a sensational experience that will not be forgotten. Speaking, reading, writing, and comprehending French are excellent skills to have in your arsenal. Being fluent in French will boost your resume and prepare you to work in a variety of countries where French is spoken or in demand. It is also one of the official languages of many international organizations (including the United Nations) and can help prepare you to work in a variety of international and multinational settings.

Sorbonne University provides education at a low cost when compared to other institutions of comparable standing. Tuition is free for both domestic and international students, but there is a registration fee required to gain admission to the university. The following is a table and summary of the cost of attendance for the academic year 2021-22:

Scholarships at the Sorbonne University

Students who are under the age of 28 on the first day of classes in September are eligible. For registration in the first year of higher education, students must have a title or diploma equivalent to the French baccalaureate. The applicant must have a temporary residence card or a card issued in accordance with the code for foreigners’ entry and stay.

How to Apply for a Place at Sorbonne University

Sorbonne University International students can apply online through the UCAS Portal or the university website.

To get started with the Sorbonne University admissions process, applicants must complete the following steps:

Acceptance of Exams by The University

The eligibility requirements for enrollment at Sorbonne University may differ. As a result, before beginning the application process, candidates should carefully review the course requirements.

How Is The Hostel Facility At Sorbonne University

The Pierre and Marie Curie Campus, which is part of the Faculty of Sciences and Engineering, is a rental space for various events. Over 80 sports, including tennis and volleyball, as well as classes and sports for people with disabilities, are offered all year long. Students can also participate in the Sorbonne University sports organization. According to the French University Sports Federation (FFSU).

There is no on-campus housing at Sorbonne University. It provides online housing as a rental platform for student residences, private homes, and shared flats.

International students must purchase housing insurance. Housing insurance covers all damages or potential burglaries and is the bare minimum for a tenant. To detect any breach of contract, a security deposit is required. When a student signs a lease, the landlord will typically request a security deposit. The Personal Housing Assistance Fund (APL) is a housing assistance program available to applicants.

What is Sorbonne University Known For?

Alumni of the Sorbonne University

Alumni are able to attend conferences, visit campuses, interact with new incoming students, and use libraries. They can also advance their careers or expand their businesses by contacting Sorbonne University researchers. They have the opportunity to raise funds for the ‘Welcome to the Future’ program.

The university has produced extremely successful and well-known alumni who are well-known researchers, entrepreneurs, entertainers, and so on. Among the institute’s well-known and influential alumni are:

Placements at the Sorbonne University

According to Times Higher Education, the institute ranks #63 in terms of employability. Sorbonne University was ranked #141-150 in the QS Top Universities Rankings, 2021, and has seen an increase in rankings for employability in recent years.

Professional integration is 93%, with 35% being doctoral students. 94% of bachelor’s degree holders continue their education. The following jobs were obtained by master’s students within 30 months of graduation:

So far, Sorbonne University has produced 4,132 publications and 51,702 citations. At the university, teaching and research are inextricably linked. International students can pursue bachelor’s, master’s, and doctoral degrees at the university. In addition to teaching, research is organized around three major disciplinary areas, with 36 research teams and ten doctoral schools.

According to several ranking surveys, Sorbonne University is unquestionably one of the best institutes in France in terms of educational quality and research outputs. Despite its academic excellence, the university has a very generous acceptance rate, attracting students from all over the world in large numbers. Sorbonne University has unquestionably set a standard in comparison to other private institutes around the world, and is thus regarded as one of the best universities for higher education in the entire world.

Why Is The CUET Exam Getting So Much Flack From Students?

What are the Different Components In Automation Anywhere?

How Hiring a Professional English Tutor Can Help Your Kid?

What is future of Degree in economics in UK